When I noticed the seductive ad for Push Push Theatre’s newest show, “See Through”, I felt excited about the prospect of going to an art exhibition for the first time in a long time. Unfortunately I’m so often disappointed by what the Atlanta art scene has to offer (more on that on another day) that I had unconsciously slipped into a period of art show abstinence. The ad itself was mysterious and cryptic. I couldn’t figure out if it were going to be a performance, an exhibition, an installation… or all of the above? I believe the words “party” and “maze” were also used somewhere. It held my gaze long enough that I was actually willing to purchase a ticket to experience it. The interactive cross-disciplinary foundation appealed to the adventurer in me, so it felt like just the cure to my malaise. 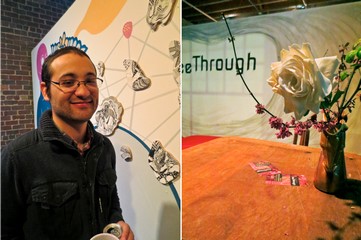 When I drove up to the show, I could already feel judgment brewing within me. The windows revealed a sparseness that felt unfinished and large bean bag chairs on the ground. I told myself that I needed to be more supportive, so I consciously made an effort to open up my mind to accept what might be hiding behind the white walls. Upon entry I was told that I was attending an engagement party and asked to choose whether I was a friend of the bride or groom. I naturally chose the bride and was given a key chain and a number. The hostess told me to remember these things for later on the night. I happily accepted and went about my way to explore the space.

There wasn’t that much to see at this point. With only a few pieces on the wall, I wasn’t sure how the evening was going to evolve into a full narrative. A band played songs throughout this pre-show party and the atmosphere felt very similar to just a regular art show opening. As we approached closer to “show time”, the hostess took on the role of MC and game master to get the crowd interacting with one another using the lure of tequila shots (is there such a thing?). I couldn’t help but wonder what the heck was going on and why was this happening, but again I did my best to just go with it. 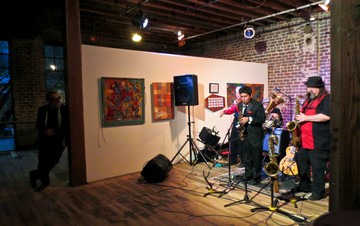 I was thankfully drawn out of the game by one of the performers(?) to go to “the Closet”. She enticed me saying that it was a very fun place and that she could take me there. Being the willing creature I was that night, I obliged and followed her into the back of the space – the maze, if you will. She led me to a door and told me to go in and lock the door behind me… can you see where this is going? I don’t want to get into explaining what happened while I was in the closet, but I can tell you what I think is supposed to happen in there. The closet is a small and intimate space where you hide, indulge, and allow yourself to do whatever would make you fearful or ashamed in the light of the real world. It is the literal and metaphorical closet where you become some aspect of yourself you don’t have the courage to be in any other situation. 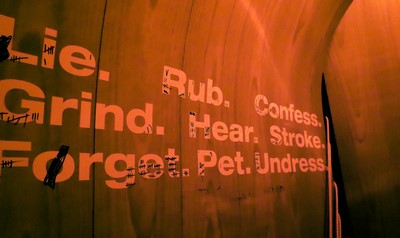 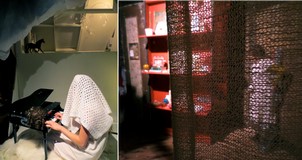 I came out of the closet and everyone had been let loose within the “house”, which comprised of small rooms/installations done by various artists. These rooms typically contained some sort of prompt or challenge to the viewers, much like the Closet (perhaps not as intense though). I scoured the house for something exquisite or interesting to do or see, but came up with nothing. After about 20 odd minutes, I just couldn’t find anything further to do so I left and continued on with my normal night life.

Seems anticlimactic, huh? Perhaps I didn’t get involved enough. Perhaps I’m too jaded from working in the commercial art industry. But the truth is I wanted this to be so much more than it was. I yearned for this experience to show me a glimpse of Atlanta’s potential greatness. Perhaps my expectations were too high. But why shouldn’t they be? Why don’t we strive to do something of great note – whether it’s horrific, cheeky, or grandiose? It just needs to BE something, with all of its possible energy or might. Make me feel SOMETHING. More angry, more small, more in love. Something. 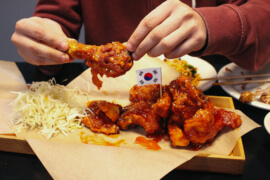